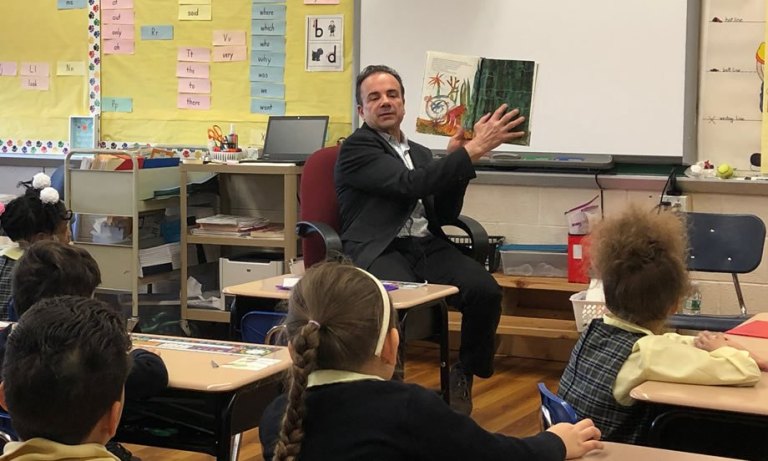 CATHOLIC ACADEMY OF BRIDGEPORT – A St. Raphael Academy first grade class was surprised with a visit by Mayor Joseph P. Ganim as a “guest reader” on Thursday, January 31, 2019. Mayor Ganim spoke with the students about his role as mayor of Bridgeport, and then shared that he had attended St. Raphael when he was their age! He then read, “A House for Hermit Crab,” by Eric Carle, to the class. 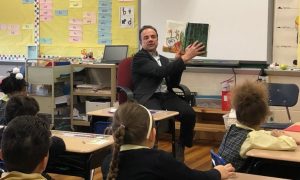 Mayor Ganim’s visit was organized as part of special Catholic Schools Week activity for students to learn about and meet leaders in their local community through having a “guest reader” for each class. City Councilwoman Maria Viggiano Zambrano read to a class on Monday. Other guests included Monsignor Chris Walsh (pastor of St. Charles Borromeo Church), Fr. Michael Novajosky (pastor of the Cathedral Parish), Board members of the Catholic Academy of Bridgeport, and local government workers.

St. Raphael Academy, educating students in prekindergarten through third grade, is one of four campuses of the Catholic Academy of Bridgeport, which provides a Christ-centered, academically rigorous learning environment where cultural diversity is welcome, Catholic values taught and all faiths celebrated. Students are nurtured, encouraged and challenged in preparation for a successful life of leadership and service. The other three campuses are: St. Andrew Academy (grades PK – 8), St. Ann Academy (grades PK – 8) and St. Augustine Academy (grades 4 – 8).