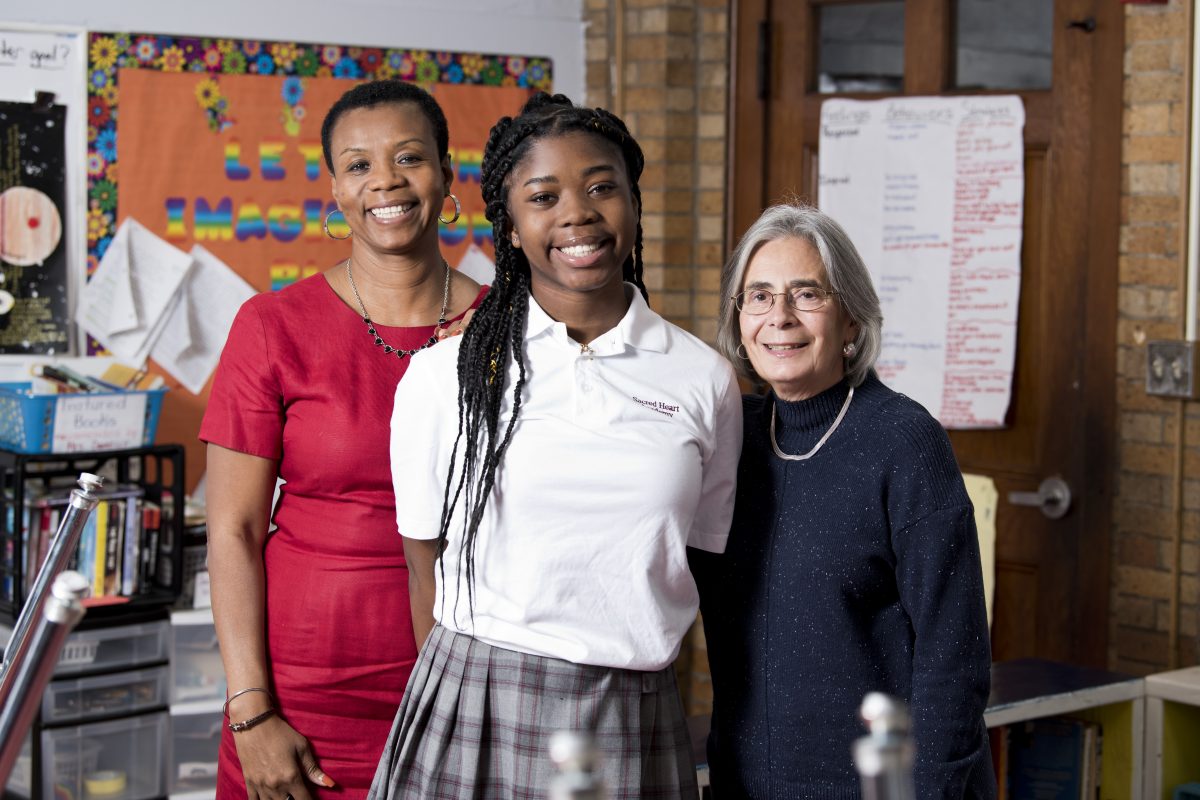 Marie Telfort has much to be proud of. A unit controller at Sodexo, Telfort’s three daughters graduated from the Catholic Academy of Bridgeport’s St. Augustine campus and went on to terrific success.

Her oldest daughter, Vengie, graduated from Lauralton Hall then received a B.A. from Assumption College and an M.A. from Suffolk University; post-graduation she interned for the European Parliament in Brussels and today works as a digital analyst for CBS. Telfort’s middle daughter, Elizabeth, graduated from Sacred Heart Academy in Hamden in 2015 and received both a B.A. and an M.S. from St. John’s University where today she is a graduate assistant. Her youngest daughter, Elisha, is a freshman at Sacred Heart Academy, where she is a member of the Key Club and just finished a stellar volleyball season.

But things weren’t always so happy and bright for Telfort and her daughters.

Originally from Haiti and one of seven children, Telfort grew up in a household where a high value was placed on Catholic education. So naturally, when she moved to the U.S. in 1998, she sought out a Catholic school for her girls and was thrilled to find St. Augustine. “It’s very family-oriented. Everyone knows everyone.

Teachers always have time for your kids after school, they have a social worker in the school and there are small class sizes. And number one, it was always a safe environment.”

But in 2011, the family experienced hardship, including the loss of both of Telfort’s parents. “I had a lot of tragedy in Haiti then went through some personal tragedy in Bridgeport. Despite working, my financial situation was falling apart. With one daughter in Lauralton Hall and two in St. Augustine, I started wondering if I should tell my children they would be unable to graduate from the schools they were in.”

Telfort decided to call Ann Marie Donnelly, an 8th grade teacher at St. Augustine whom she trusted and respected. “Mrs. Donnelly said, ‘Don’t tell the girls they won’t be able to graduate.’ She told me to make an appointment with the principal, social worker and financial person. That was the best advice because when I called, they stepped up to help us. They didn’t let money be an obstacle to a good education. I will never forget that.”

And praise for the school extends further. “When my oldest went on to high school, her English teacher there asked me to make sure I told her 8th grade English teacher at St. Augustine that she did a really good job,” shared Telfort.

When Elisha graduated last June, the family decided to show their gratitude for one teacher that all three Telfort children had: Mrs. Donnelly. “The girls called it a ‘Legacy Award’ and it was a very special surprise. But it was also a little embarrassing because it’s all of the teachers that prepare these students for high school, not just me,” said Donnelly.

The Telfort family is just one of hundreds of families who received needs-based assistance last year, totaling more than $2 million. Telfort said that if it wasn’t for the generosity of donors who make such aid possible, she doesn’t know how her daughters’ lives would have turned out.