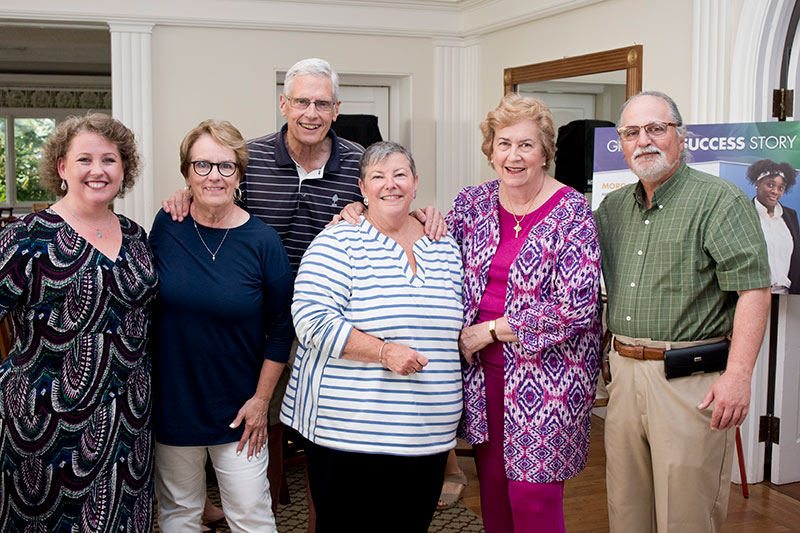 The Catholic Academy of Bridgeport held its 7th Annual Golf Classic at The Country Club of Fairfield on Monday, August 19. The event was a “birdie” by all accounts: picture-perfect weather, sold-out foursomes and a successful auction following golf that raised more than $200,000.

This year’s event was held in memory of Richard T. “Dick” Carroll, who was a 1960 alumnus of St. Augustine, one of four campuses that make up the Catholic Academy of Bridgeport; the other three being St. Andrew, St. Ann and St. Raphael. Dick, who died unexpectedly last July, and his wife, Susan, had been longtime supporters of the Academy and regularly attended fundraising events. For many years, the Carroll’s also sponsored a student through the Catholic Academy of Bridgeport’s Leaders of Tomorrow program, something Susan Carroll said she is committed to continuing.

“We have been so happy to support a young Catholic Academy of Bridgeport scholar named Amy who Dick and I first became acquainted with when she was just beginning school, and I will continue to support her as she successfully winds her way through school,” said Carroll, who was joined at the podium by her daughter, Molly Carroll Cole. “Dick and I cherished looking forward to receiving her report cards each year and hearing of her achievements, and I am honored to stand behind her as she completes elementary school. If you are looking for the best way to bet on the future, I urge you to consider sponsoring a Catholic Academy of Bridgeport student! You will not regret your investment.”

Echoing Carroll’s sentiments was Catholic Academy alumnus and guest speaker Sergio Lara, who was once a scholarship recipient himself.

“My parents immigrated to the U.S. in the late 1980’s and did not have faith in the Bridgeport public school system. It was only through financial assistance from the Catholic Academy that my two brothers and I were able to attend school there,” said Lara. “The fantastic education I received became the foundation for my future learning at Kolbe Cathedral High School and Fairfield University. Upon graduating college, I secured a job at PricewaterhouseCoopers as a member of their Mergers & Acquisitions group, and after assisting some of the world’s largest companies in complex transactions for six incredible years, I am now a Corporate Strategy Consultant at BDO. It is with utmost gratitude I stand here today to thank the Catholic Academy of Bridgeport for their generous gift that truly changed my life.”

Each year the Catholic Academy of Bridgeport awards more than $2 million in needs-based financial assistance to the 85% of its student body whose families cannot afford the annual tuition of $5,000. In fact, some of the schools’ nearly 900 students are among the poorest in the state of Connecticut, and 61% qualify for free or reduced lunch.

Such scholarship opportunities are only made possible by proceeds from three major fundraising events held throughout the school year (including a fall dinner, a spring gala or luncheon, and Annual Golf Classic), gifts to the Academy’s Leaders of Tomorrow program, and other donations made throughout the year by generous individuals and foundations.

During the cocktail reception, Angela Pohlen, Executive Director of the Catholic Academy of Bridgeport, assured the 160 guests in attendance that their support today would have a life-changing impact.

“900 children are getting ready to start their school year. Because of your partnership, they will walk and drive past the public schools where they are “supposed to attend” and where their stories have already been written for them,” said Pohlen. “They will pass by schools where only 23% of their peers are on grade level, and where violence and instability reign. Because of your partnership they will enter one of our campuses – where they are being given the tools to write their own, much different stories; where school is not the end, but the beginning; where 100% of them will go on to high school, and 99% will go on to college or secondary schools. They can pass by the schools that tell them they are only a statistic and attend a school that promises them something more.”

To find out more about the Catholic Academy of Bridgeport, sponsor one of their Leaders of Tomorrow students or RSVP to their upcoming Fall Dinner Fundraiser on Wednesday, October 2, at Polpo Restaurant in Greenwich, please visit our event page or call 203-362-2990.